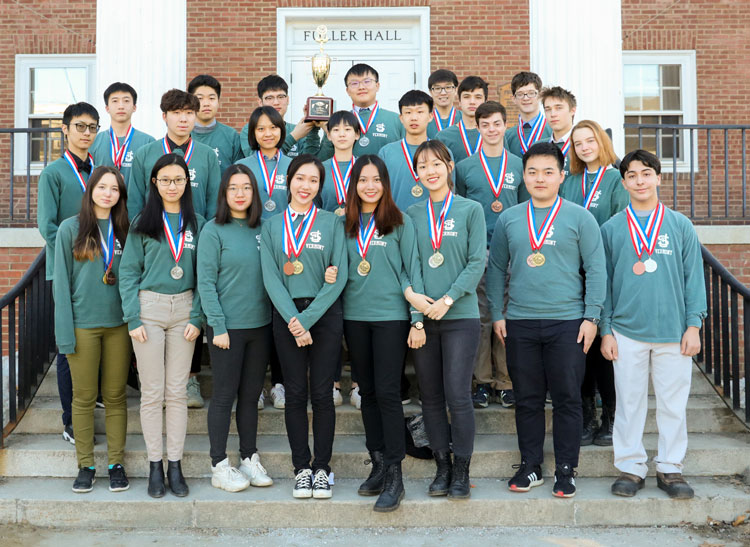 St. Johnsbury Academy science students recently placed first in the Vermont State Science Olympiad at The University of Vermont in Burlington, Vermont. Two additional teams from the Academy also competed placing fourth and seventh. The first-place team has opted out of the national competition at Cornell University in Ithaca, New York, since it falls on Commencement weekend.

The UVM website describes the Science Olympiad: “For the past 35 years, Science Olympiad has led a revolution in science education. What began as a grassroots assembly of science teachers is now one of the premier science competitions in the nation, providing rigorous, standards-based challenges to nearly 7,800 teams in 50 states. Science Olympiad’s ever-changing line-up of events in all Science, Technology, Engineering, and Mathematics (STEM) disciplines exposes students to practicing scientists and career choices and energizes classroom teachers with a dynamic content experience.”

The team’s coach, science faculty member Cristin Ashmankas, said, “I am incredibly proud of the hard work and dedication of all our Science Olympians. These students put hundreds and hundreds of hours into their preparations and training, and it all paid off!”

Headmaster Tom Lovett said, “The number of medalists in this group of Olympians across a wide range of fields is impressive, and I am even more impressed with their commitment throughout the year. Congratulations to Ms. Ashmankas and all of the competitors! Their families should be very proud!”