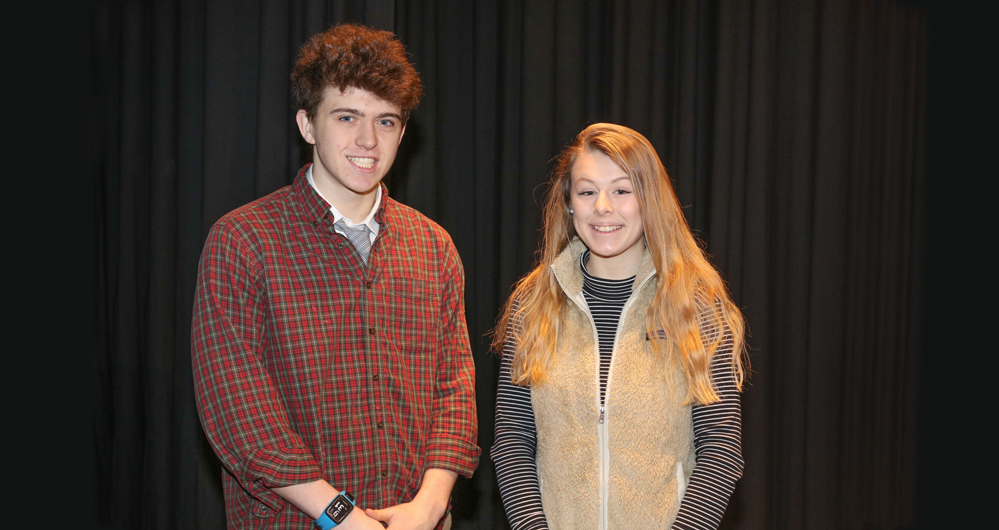 St. Johnsbury Academy senior Alaura Rich of St. Johnsbury was awarded 2nd place in the 2018 State of the Union essay contest sponsored by Vermont Senator Bernie Sanders. In addition, junior Mason Castle of Walden was recognized as a finalist among only 20 from across the state. The essays of winners and finalists will be entered into the Congressional Record, the official archive of the United States Senate and House of Representatives. Alaura and Mason will join Senator Sanders for a roundtable discussion at the Statehouse in Montpelier on Saturday, February 10.

Essays were written by 585 students representing 47 schools from across Vermont, the most ever to enter the contest. According to a press release distributed by Senator Sanders’ office, the contest “gives Vermont high school students an opportunity to describe which issues they would prioritize if they were president.”

The release continues, “Alaura Rich, a senior at St. Johnsbury Academy, was the second place winner. Rich wrote about the prohibitive cost of a college education and the need for the United States to have the best-educated workforce in the world. ‘The Declaration of Independence birthed the underlying fundamental foundation of our nation’s belief in both opportunity and upward mobility, and it is the responsibility of the United States government to ensure equal educational opportunities for all,’ Rich wrote.”

Alaura Rich wrote her essay as an assignment for Helen Sullivan’s Contemporary Issues class. It reads in part,

Although there are many major issues that our country is struggling to solve, our fractured, inequitable educational system does not fall short of making this list. The appeal of a college education has shifted dramatically from what it began as: rather than a means of developing equal opportunities for young people in pursuit of work-related skills and knowledge, it has become a societal expectation with a large price tag that can only be easily achieved by those of upper-middle-class status. First-generation, low-income students are left at a significant disadvantage. These students often lack parental support, knowledge of the process, and critical resources. Furthermore, their country is failing to provide them with the financial-aid system that they desperately need in order to afford a college education.

It’s time to enact change within the American higher education system. We must make public colleges and universities tuition-free, end the federal government’s ability to make a profit off student loans, substantially cut student loan interest rates, and allow low-income students to use need based-financial aid and work-study programs to make their college debt-free (by covering room and board, books, and living expenses). By taking these steps, the opportunity gap in America would see a significant decrease. Minority students would see the same basic right to higher education as their more advantaged peers, and the future economic state of our Nation would be in the hands of the promising young individuals who are currently being underrepresented in colleges nationwide due to a lack of support. The Declaration of Independence birthed the underlying fundamental foundation of our nation’s belief in both opportunity and upward mobility, and it is the responsibility of the United States government to ensure equal educational opportunities for all.

Senator Sanders said, “For our democracy to work, students must be engaged on the challenges facing our country. As is always the case, I am impressed by the wide range of issues our students wrote about this year. While there is no shortage of obstacles facing the United States, it is heartening to see so many young Vermonters thinking about the direction we need to go as a nation.”

St. Johnsbury Academy Headmaster Tom Lovett said, “I am grateful to Senator Sanders for sponsoring this annual essay contest. It is, as he says, an excellent way to engage students in discussing solutions to the problems our nation faces. I am proud of Alaura for her thoughtful discussion of the need for more affordable college education. I am also proud of Mason for his articulate essay, which presents a solution to race-based gerrymandering. Both Alaura and Mason have very bright futures ahead as engaged and informed citizens, and we are fortunate to be able to play a part in their education.”