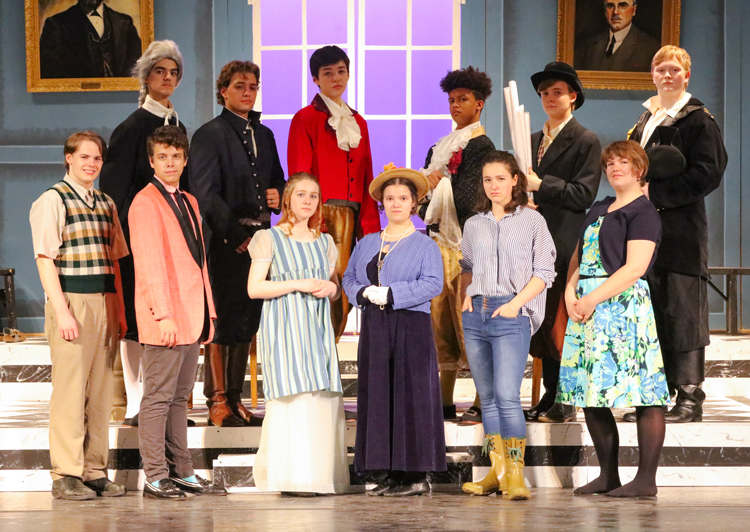 SJA Theatre presents Tom Stoppard’s Arcadia May 17 and 18 at 7:00 p.m. and May 19 at 2:00 p.m. Tickets are $5 for students and senior citizens and $10 for adults and are available at the door. Arcadia has a number of mature themes and is unsuitable for young children.

Arcadia is a comedy that takes place in two time periods simultaneously in Derbyshire, England: 1809 and the present. The play is also a mystery as the modern characters try to figure out what happened that April in Derbyshire, England, when Lord Byron came to visit. Was there a duel that resulted in a death? Did a young woman of only 13 discover a scientific principle two hundred years before anyone else did while the adults engaged in radical gardening and extreme flirtation? At its core, Arcadia is a story about people falling in love with the wrong person. As Lady Croom, whose estate, Sidley Park in Derbyshire, England is the setting of the play and who is one of the cast of characters from 1809 observed, “It is a defect of God’s humor that he directs our hearts everywhere but to those who have a right to them.”

The play has two casts of characters, one from each time period. The cast from 1809 includes Septimus Hodge (Liam Picard ’20), the tutor of the scientific Thomasina Coverly (Elizabeth Gilmartin ’19), Lady Croom (Shaelyn Craft ’20), mother of Thomasina and Augustus (Lukas Morris ’21), their butler, the comedic Jellaby (Gavin Ghafoori ’21), the brother of Lady Croom, Captain Brice of the Royal Navy (James Rust ’19), Ezra Chater, poet and guest at Sidley Park (Trey Armbrister ’19) and Richard Noakes the landscaper (Marc Lamontagne ’20). When the play switches to modern times we follow Hannah Jarvis (Lily Sullivan ’18) who is visiting at Sidley Park in the present to study the history of the gardens chronicled by Lady Croom. The present Coverly family includes Valentine, a scientist studying grouse (Michael Lamontagne ’18), Chloe, a young woman on the verge of college (Margeaux Rotenberg ’19) and Gus, a brilliant young man who does not speak (Lukas Morris ’21).  Bernard Nightingale, an academic studying Lord Byron (Sam Bulpin ’19), visits the Coverly family trying to get information about Byron and inadvertently helps Hannah and Valentine discover what actually took place in 1809 that included a mysterious death, a fatal fire, and a hermit famous for his mathematical research.