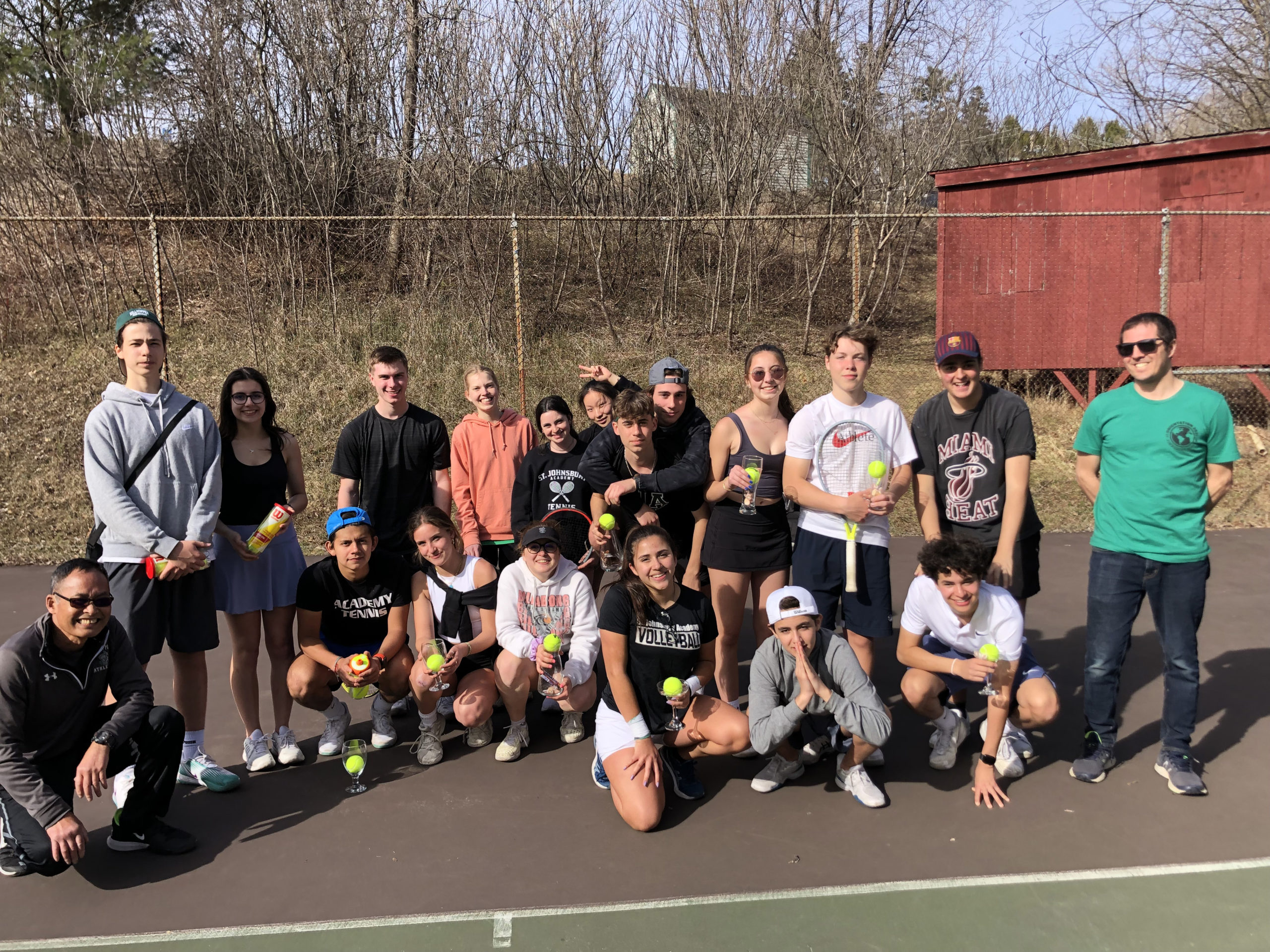 To kick off the Spring Break week, the St. Johnsbury Academy varsity tennis teams partnered up to play a mixed doubles tournament on Monday, April 18th. Coaches Dan Bosco and John Sayarath hope the tournament will become an annual event — a way to mix up practices during spring break week. The student-athletes on varsity teams commit to staying on campus during the break to participate in week-long and weekend practices and matches, and the tournament is a way to add some fun to the schedule. The inaugural event on a sunny but cool afternoon at the Kiwanis courts in St. Johnsbury was a successful event and fun for the two teams.

“It is nice to bring the two teams together and have a mix with different players teaming up. It brings a lot of good energy to the teams.” Dan Bosco, the boy’s coach said. Bosco came up with the idea for the tournament and suggested it to John Sayarath, the girl’s coach, who immediately bought into the plan and spent the weekend organizing the draw, arranging snacks for the student-athletes, and small prizes to be awarded to the finalists and a sportsmanship award.

The students were organized into three groups of mixed doubles teams and competed in a round-robin format. The tournament had 18 players, nine boys and nine girls. Every team ended up playing three eight games of pro-set matches. The top four teams received trophies, and two other players received the sportsmanship award. The matches started at noon, and the championship match didn’t end until 4:00 pm.

“Everyone was having fun and a great time teaming up with different players and competing in a relaxed setting,” Sayarath said, “The weather held out, and it was a perfect afternoon to be outside on the first day of spring break.”

“I had so much fun today!” Juanita Narvas Epinal, a student from Columbia, said. “It was good to team up with the boys and play doubles.” Brandon Liddick added that it was nice to play with partners of different skill levels, “I learned so much from Skyler (Skylar Bodeo-Lomicky), who is playing #1 for the girls. We played such a competitive match, and she taught me a lot about staying calm under pressure.”

Coaches Bosco and Sayarath are optimistic about the season ahead for the teams. “This is a great group of students,” Bosco said of the boys’ team, “One of the most talented and versatile teams I have coached.” This is Bosco’s 8th season coaching the Academy’s boys’ team. He has coached several Academy players to individual state championships, including Mate Koszo (2021, 2019) and Takahiro Matsumoto and Owen Pakseubsin (2019 doubles state champs). “If all goes well, this year we will be a contender for the title as a team,” he added.

Coach Sayarath is inspired by the enthusiasm and spirit of the girls‘ team. “I have been impressed by the leadership and positivity, so many of the girls on this team have displayed so early in the season,” he commented. “We played a tight first match against last year league champion Montpelier team, and while we ended up short 3-4, we made our opponents work for every point in extended matches, many of which went to tiebreakers. This group has a lot of grit and gusto and will only improve as the season goes on.” This is Sayarath’s 13th year of coaching and he returns this season after a two-year hiatus. Like the boys’ team, the girls’ team has had several individual state champions and finalists, including, Kimicho Gordon (2006) and Ayame Yazama (2013 state champion, 2014, 2015 finalist), and teams (Boys and Girls) that have won the Mountain League title (2010) and have made it to final four in the state tournament (2009, 2010).

Monday’s student tournament concluded in time for the Monday night men’s tennis group to take the courts for the first time this season. The students look forward to a week of practices and clinics to tune up for matches with Rutland on Saturday (boys at home, girls away). The winners of the inaugural mixed doubles spring break tournament were: