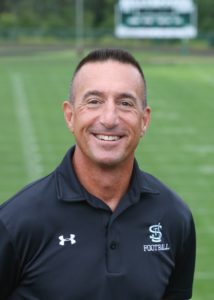 Now in his 9th year as the Head Football Coach at St Johnsbury Academy, Rich Alercio has taken the Hilltoppers to four state championship appearances.  Highlighted by an undefeated 2017 State Championship season. Prior to coming to St Johnsbury, Alercio was named the first Head Football Coach in the history of Castleton University. In only their second year, the Spartans had a winning record and finished second in their conference. During that second season at Castleton Alercio’s offense ranked in the top 10 nationally in five statistical categories.

Alercio began his career at West Chester University as a Graduate Assistant Coach. Two years later he moved to East Stroudsburg University as an assistant coach. At both schools, he helped them win their conference championship and appear in the national playoffs.  Most of his career was spent at The College of New Jersey (formerly Trenton State College) where he served as the offensive coordinator and offensive line coach. During his 15 years there, the Lions made six post-season appearances, won five conference championships, and finished three seasons ranked in the nation’s top 10. In July, 2008, Alercio was featured in American Football Monthly where he was described as “a guru of offensive line play in the northeast part of the country.

In 2017, Alercio was named Vermont Division I Coach of the Year. In 2018, NNEKY (Northern New Hampshire Northeast Kingdome Vermont) named him their all sports Coach of the Year.  In 2020, Max Preps listed Alercio as Vermont’s top high school football coach.

Alercio speaks annually at the largest football clinics in the country, USA Football National Conference, Glazier Mega Clinics and Nike Coach of the Year Clinics.  He is the original offensive line contributor to xandolabs.com.  He has run the Alercio OLine Clinics for 20 years in New Jersey, Pennsylvania, Maryland and Vermont and has written over 100 blogs on his site olineskills.com

Alercio lives in Vermont with his wife of 26 years, Kim. Their oldest son, Jake, is a recent graduate of Fairleigh Dickenson University. Middle son, Shane, is a senior football player at the University of New England. Youngest son, Trey, after serving a gap year with AmeriCorps, will be a Freshman at the University of Connecticut.